The Ultimate Guide to True Threat Threats and Hip-Hop

Although the First Amendment does guarantee Americans the right to freely express themselves, that guarantee is not absolute. Free speech does not include inciting actions with the intent to harm others or production of obscene materials. True threats, a form of speech founded in Watts v. United States, is not protected speech because the speaker is communicating an intention to harm another. The problem with the true threat exception is that Supreme Court has consistently failed to create a test for lower courts to follow when analyzing true threats. This has led to the lower circuit courts adopting several different tests when analyzing true threat cases. There is no uniformity across the country.

Several recent true threats cases have involved the use of hip-hop lyrics penned by the defendant. Hip-hop lyrics have been used by prosecutors to help prove the defendant’s state of mind at the time of the crime. An amateur rapper named Jamal Knox was prosecuted for communicating terroristic threats after law enforcement discovered a song written by Knox. The song’s lyrics contained the names of specific Pittsburgh Police Department Officers and Knox’s desire to harm the police officers. Knox was found guilty when the lyrics were admitted into evidence. On appeal, Knox’s conviction was upheld and his appeal to the Supreme Court was rejected. The issue with allowing hip-hop lyrics as evidence is there are negative biases associated with hip-hop. These negative biases stem from negative stereotypes people have about Black people. These negative biases can result in unjust verdicts because the criminal justice system does not appreciate the art of hip-hop.

A bright-line test is needed to analyze true threats to protect the First Amendment rights of the speaker and ensure the victim is protected from harm. Circuit courts have used either an objective general intent test or a subjective specific intent test. A test that is a hybrid of both a subjective and objective analysis ensures the defendant is prosecuted by requiring a guilty mind and an objective aspect ensures the full context of the threat is considered. Specifically, in hip-hop cases, courts would have to consider hip-hop’s use of literary devices when deciding if the lyrics are a true threat. The right to free speech is one of the most important rights Americans have and it should not be taken away without a proper analysis. 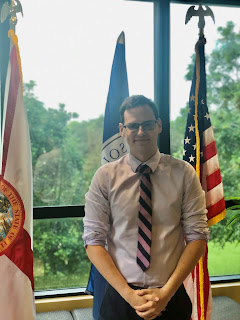 Zachary Stoner is a second year student at the Shepard Broad College of Law.  His article, What You Rhyme Could Be Used Against You: A Call for Review of the True Threat Standard, is forthcoming in the next issue of the Nova Law Review, Volume 44.  Prior to attending law school, he earned a Bachelor’s Degree in Criminal Justice at Florida Gulf Coast University and is a lifelong and unrelenting hip-hop fan.  His dream is to one day own several Pembroke Welsh Corgis.