Florida Joins the Voter Restoration Trend: What You Need To Know About Amendment IV and The New Bill

The United States leads the world in incarceration rates.  In 1976, 1.17 million individuals were disenfranchised; this number increased to over 5.85 million in 2010.  This increase in disenfranchisement is disturbing because these people are unable to participate and be part of our democracy undermining the political process.

Recently, Florida joined the voter restoration movement with the passage of Amendment IV in the 2018 elections.  The Amendment would restore voting rights for felons in the state who had completed all terms of their sentences.  With the exception of those convicted of murder or sexual offenses.

Over 1.5 million Floridians were estimated to regain their right to vote.  However, Florida legislators passed a repayment bill in order to continue to regulate the franchise.  The bill requires Florida residents convicted of a felony to satisfy the debt incurred as a result of their sentence before regaining the right to vote.

Following the passage of Amendment IV, Florida legislators argued that the amendment was vague and needed clarification.  After months of debate, the legislators passed Senate Bill 7066 and Governor RonDeSantis signed the bill.  This bill includes a requirement in which Florida residents convicted of a felony are required to pay all Legal Financial Obligations ("LFOs") before regaining the right to vote.  Requiring payment of LFOs before restoration of voting rights means that Florida residents now have to pay hundreds of millions of dollars in LFOs before being able to vote.

Since the 1990’s, the Florida legislators have passed laws creating more than twenty categories of LFOs for different criminal offenses.  These fines serve as penalties for the crimes committed separate from court costs and restitution fees.  Concurrently, legislators have passed laws eliminating exceptions for felons unable to satisfy their LFOs.

Mandatory fines are attached to every offense, “from money laundering to driving under the influence, writing graffiti, and soliciting prostitution.”  For example, a conviction of drug trafficking is attached to a “mandatory fine of $25,000 to $500,000 per count.”  This leads to most ex-felons facing an insurmountable amount of debt upon completion of their sentences, and yet another barrier before regaining their right to vote.   Those who never pay their outstanding will be permanently disenfranchised.


Legislators claim that the bill was necessary for clarification.  However, the bill does not address many issues which will create more confusion than automatic restoration would have.  Florida already has a very complex system for dealing with repayment of LFOs.  There is no single entity in place to track LFOs and it will be very expensive to create such a system.  Further, the process of petitioning a judge to convert outstanding LFOs into community service was not laid out in the bill.

The current system creates a cycle of debt for ex-felons attempting to reintegrate into society.  The incarcerated population is often unable to pay these fees.  In enacting this bill the legislators and the governor have failed to consider the effects of this insurmountable debt on those convicted of crimes who are attempting to re-entry society.

Further, the Florida legislation ignored the outstanding support of Amendment IV across party lines by passing this bill.  This undermines the democratic process, which should ultimately rest on the will of the people.  Many voting rights advocates are equating this bill to a poll tax because the majority of individuals with felony conviction are members of the African American population and more likely to be poor.  As a result, several voting rights groups have filed lawsuits questioning the constitutionality of the new bill.

Conditioning voter restoration on full payment of carceral debt could lead to a crisis where millions of people, majority of which likely African Americans, will be permanently disenfranchised because they are unable to pay their carceral debt.  The African American population is more likely to live in poverty and are more likely to be in the criminal system throughout their lifetime.

Automatic restoration eliminates the confusion and burdens that are set with overly restrictive restoration bills.  These laws are constantly changing, vary from state to state, and create a lack of knowledge not only among ex-felons but among election officials as well.

As discussed above, the new repayment bill in Florida will create confusion because there is no one system in charge of managing carceral debt.  Thus, it will be hard to regulate who is eligible to vote, or who has satisfied their payments.  Further, there is no system in place in Florida for judges to deal with the influx of people who will petition to have their carceral debt turned into community service.  Automatic restoration would eliminate all the hurdles and confusion that arise from the passing of this repayment bill.

The right to vote is a fundamental right.  It allows citizens to play a role in the political process.  For the African American population, it is a right they have fought and died for.  Felony disenfranchisement laws after an individual has completed their sentences serves only as over-punishment.  Not allowing ex-felons to vote and restricting them from regaining their right to vote after serving their time exacerbates inequality and shows them that they are not welcomed back to reintegrate into their community.  Thus, automatic restoration of voting rights is necessary to ensure that we continue to protect the democratic process.  It is not a true democracy when millions of citizens cannot vote yet have to abide by the same laws as those who have a say in the political process. 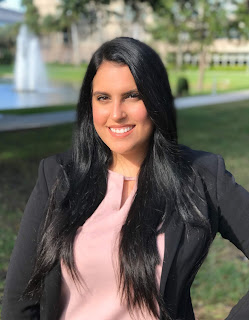 Carol Gonzalez is a member of the NSU Honors Program at the Shepard Broad College of Law.  Her Comment, Is the Rising Trend of Voter Restoration Leading to Permanent Disenfranchisement of Felons?  Florida Joins the Voter Restoration Trend, is forthcoming in the next issue of the Nova Law Review, Volume 44.  Prior to attending law school, she earned her bachelor’s degree in Political Science and International Relations at Florida International University.  She lives in South Florida and enjoys being involved in her community.
Labels: Amendment 4 Automatic Restoration Florida Repayment Bill Voter Restoration