Visceral and gory, like the truth. Robert W. Kelley's new book The Memorandum, combines drama, intrigue, and even the elements of a mystery to tell the legal saga of a family who bravely stood against a large corporation—and won. 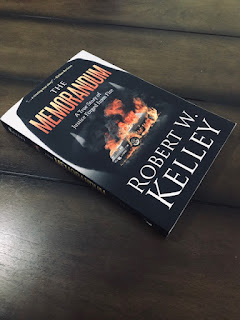 About the Story
It starts with a boom, a hellish scene where a young life ends and the search for the truth begins. In this book, Bob Kelley is the main character, and the reader learns about him through his first-person, autobiographical recounting of what it was like to face a modern day Goliath in the courtroom.  General Motors is the defendant in the case, and their attorneys play into the role well (like the Cooperman McBride lawyers in Amazon Prime's Goliath), throwing shade at every question and tactic Kelley and his team prepares. Kelley reveals the harrowing story of Mike & Catherine Murphy, the clients whose heartbreaking story will tug at any reader's emotions. The plot weaves through difficult depositions, wily witnesses, and surprise subpoenas in the firm's relentless pursuit for the truth.

"It's not a game. And it's not a trick. It's what a good lawyer does to help the jury see the victims as living, breathing human beings that they can relate to and connect with."

Sometimes it reads like a novel, other times, it sounds like window dressing for what was supposed to be a memoir, but throughout it is a realistic view of what can truly happen in a long, arduous legal battle with formidable and well paid opponents. The story crescendos as any good trial does, with  closing arguments, and there are no spoilers because if you read the front matter, or the back cover, or the tag line, you already know who the winners and losers are. It's definitely a book about a journey, not the destination. 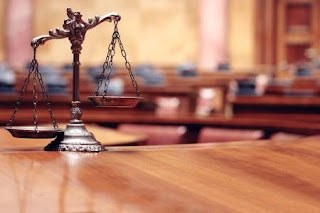 Why The Memorandum is Good for Law Students
The value of thorough and patient research, the dive into boxes and boxes of discovery, the stealth strategy on whether to object during voir dire, the art of the killer cross examination—all the legal drama wrapped in a battle between a villain and a hero. And the heroes know how to dig. They know the importance of being organized (they color-code their files), dramatic (hello, life-sized exhibits) and prepared. Notwithstanding the reviews from professors, for law students considering whether they have the interest in trial work, this book will give them a chance to understand the volume of what it takes in cases like these. Kelley only realized that being a trial attorney for these victims was his passion when he was in his third year. As a 3L, he took a trial advocacy class and that set him on his path. He admonishes students to take as many and learn as much as you can, but most importantly to enjoy it and pursue your passion throughout. 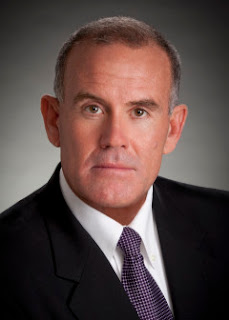 About the Author
Bob Kelley has been an attorney for almost forty years and is known as a fierce trial advocate for victims of catastrophic injuries and plaintiffs in wrongful death suits. He has been Board Certified in Civil Trial and is founding partner at Kelley Uustal in Fort Lauderdale, FL. While in law school, he was Editor-in-Chief of this publication and co-authored a comment about admiralty law and treasure hunting. His research for that project started with a small plane excursion to Key West, a day-long conversation with treasure hunter, Mel Fisher, taking off from an airstrip with no one in the control tower, and lightning storm on the way back to Fort Lauderdale. His youngest daughter is in law school and he's not-so-secretly hoping she will also become Editor-in-Chief of her school's legal journal as well. Kelley said that serving as an editor of the Nova Law Review was a great experience that helped as a lawyer because it taught him how to write well, an invaluable skill in trial practice.

Here are Kelley's answers to some of our questions about being a trial lawyer:

What surprised you the most about actual practice once you left law school?
The biggest surprise to me is probably that a lot of times the rulings made by judges in trials can vary greatly from courtroom to courtroom...but that's the job of a trial lawyer that no matter how the judge rules, you represent your client, and take it up with the appellate court.

Do you always push for trials?
Yes, because we don't take cases that will not be going to trial. A good settlement can only be obtained if a trial lawyer is ready for trial and usually not until the trial is underway.

Learn more about Robert W. Kelley and The Memorandum
Posted by: NovaLawReview at 9:54 AM No comments:

On Friday, October 11, 2019 contemporary academics, professionals, practitioners and students met on the third floor of the Panza Maurer Law Library for a day of lively discussion on the intersection between health law, intellectual property, and technology. Each year, the Nova Law Review hosts a series of panels on cutting edge topics and 2019 was as exceptional, featuring diverse speakers from all over the country.

First Do No Harm: A Patient-Driven Approach to Navigating the Health Law, Intellectual Property, and Technology Maze 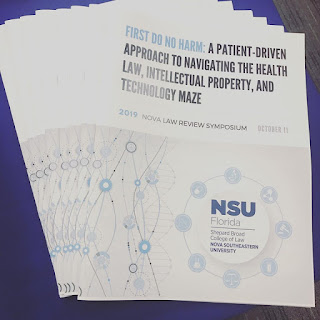 During the first session, presenters discussed the nuances surrounding many health related topics such as the possibility of a Medical Data Information Commons. Marielle S. Gross, MD, MBE started the conversation, with a simple, but provocative question: “What is health data?” From the perspective of a medical practitioner, Dr. Gross shared her perspectives on de-identified data and how aggregates can be used to help solve a single patient medical mysteries.

Melissa M. Goldstein, J.D. built on those concepts by expanding on the policies surrounding the meaning and application of “Sensitive” Health Information, how the definition has changed over the years.

To complete the panel, Sharon Bassan, Ph.D., challenged the idea of a patient control over their own genetic data. She deftly illustrated the flaws in that idea by offering as an example the prevalent direct to consumer genetic testing companies and the density of their mandatory privacy policies tied to obtaining their services. The second panel entitled "Patient Protection or Caveat Emptor? (Some) Risks Posed By High-Tech, Data-Driven Medicine" featured a composite of professionals who talked about the practical applications of law in the healthcare market. Jennifer Wagner, J.D., Ph.D. broke down the Federal Trade Commission’s ("FTC") involvement with policing marketing deception and the intersection with health products and services. Have you used eye training or blood pressure apps? If their claims to cure or improve certain symptoms are unsubstantiated they may fall under the FTC's jurisdiction.

To demonstrate the difference between the manufacture of a regular drug and a biologic, Yaniv Heled, J.S.D., LL.M., LL.B. compared it to the difference between making a skateboard and building a Tesla Model X. A red one. He explained the difficulty of expanding the biological pharmaceutical market which has a high-cost barrier to entry and steep intellectual property implications. 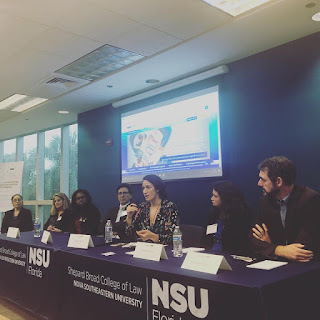 After lunch, we dove into the cutting edge topic of gene-editing, wondering if it will improve health, promote eugenics, or both. Myrisha Lewis, J.D. got us thinking about the parallels and inter-connectivity between gene-editing and assisted reproduction and how similar regulatory structures may apply, namely to allow state rather than federal jurisdiction monitor the steadily growing field.

Seema Mohapatra complimented the discussion with thoughts on the regulation of human germline editing and analyzed the impact on creating a modern era of eugenics, noting that public desire and preferences drove the science in the past.

Samantha Zyontz condensed her years of study into a compelling segment on how CRISPR gene-editing technology is actually being used and shared among the research community. Jonas Monast rounded out the discussion on gene-editing by shifting the focus to the ecosystem, natural resources, and animal life on the planet—from the hope of eliminating malaria to the wonder of bringing back extinct species! 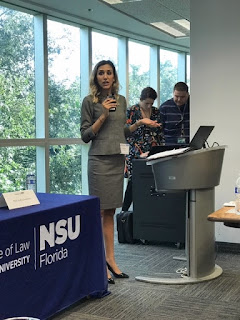 Danna Khawam, Editor-in-Chief of the Nova Law Review, was instrumental in the success of the symposium. There was a significant investment of time, effort, and organization involved in facilitating the exchange of ideas in the heathcare-technology field. The journal’s forthcoming Symposium book will be published in Spring 2020 with various articles about the topics discussed at the event.

On behalf of the Nova Law Review, we would like to thank everyone who helped make this event possible. First, we would like to recognize Dean Jon Garon, Dean Debra Moss Vollweiler, Professor Kathy Cerminara, Professor Marilyn Uzdavines, and the journal's advisers, Professor Ishaq Kundawala and Dean Elena Marty-Nelson.

We would also like to specially thank the moderators, Robert Kain and Professor Cerminara for offering their time for the panels. We appreciate Karen Rose, Kathleen Perez, Johanna Desir, and the rest of administration for the countless hours they spent preparing for to make the event a success.

Lastly, we are thankful for the support and help of Nova Law Review’s Executive Board, Robert Scheppske (Goodwin Alumni Editor), Nicolo Lozano (Assistant Executive Editor), and all the members of Volume 44.
Posted by: NovaLawReview at 10:00 AM No comments: